At the end of our California trip, we spent a whirlwind night and morning in Los Angeles. This is a how-to for finding a selection of pintrest-worthy hotspots in just a few hours.

The skyline of the city of angels appeared over the horizon of a six-lane motorway. It almost felt like we were emerging into civilisation after living in the wilderness – the freedom we’d experienced at the lake, and in the desert dissipated with every mile driven into the concrete heart of the city. We arrived at our hotel in Echo Park, a rather grim low end chain joint, but even this was covered by the almost trademark Hollywood glow.

For our last night in the USA, I had a Lakers game at the Staples Center planned. I was excited to go to Rosa Mexicano for a pre-game meal, as I have always been a fan of their New York location. The food was plentiful, and the heaped, fresh guacamole made table-side was luxurious. I dragged my food coma to our seats, way up in the dizzying height of the nosebleed section. After the game, we lost our parking space for over half an hour. Roaming the emptying lots, we laughed as we retraced our steps multiple times and in various different directions before we could retrieve our car.

Our flight was at 4pm the following day. As soon as we woke, our bags were in the car and we stopped for fantastic flat whites and handmade pastries at Alfred Coffee on Sunset.

It seemed like this was the embodiment of L.A; it was a bricks and mortar metaphor for a city built on facades, glitz and the money of some.

There were so many things I had hoped to see in L.A, we just did not end up having time for every one of them. However, we had a few hours to kill before our flight from LAX, and were up to the challenge of hitting a few spots on the way to the airport. To do this, I combined sights that were in close vicinity. First off, across the street from the cafe, were the Micheltorena Stairs. 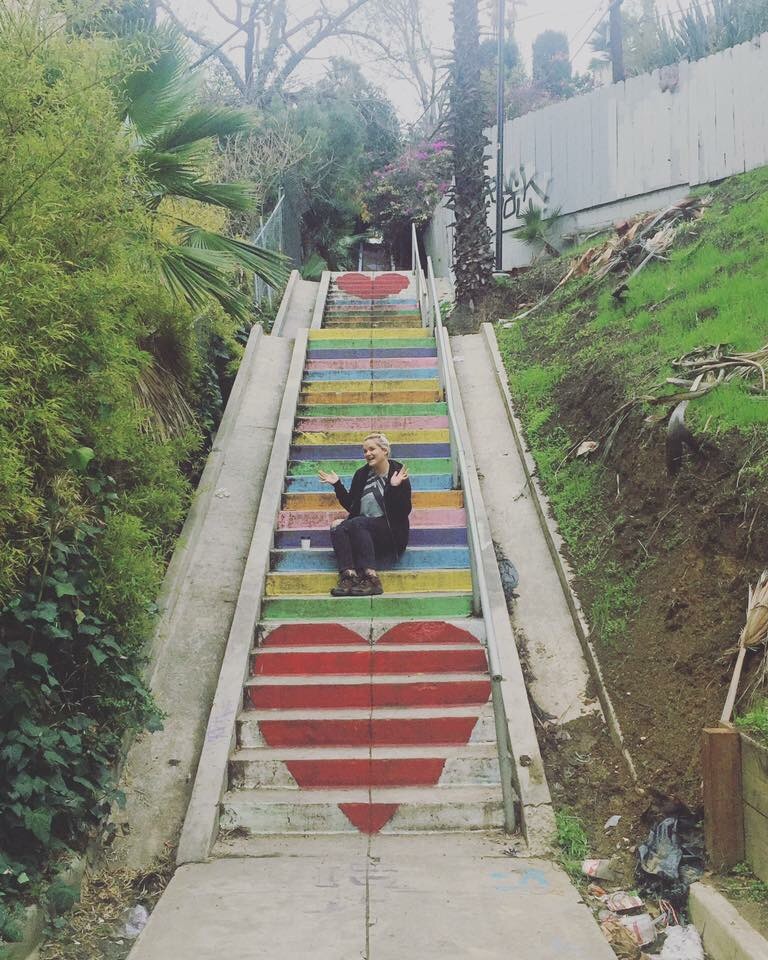 Next, we headed further west towards the Pacific. The Hollywood sign was visible to our right as we drove high above the city on the Rosa Parks freeway, even through the heavy morning cloud and fog.

Sticking to the ‘two birds, one stone’ method, we strolled a few minutes down the beach boardwalk until we found hidden between the modernistic millionaires’ homes a real-life Barbie house; the home of Barbie Creator Ruth Handler. It seemed like this was the embodiment of L.A; it was a bricks and mortar metaphor for a city built on facades, glitz and the money of some. 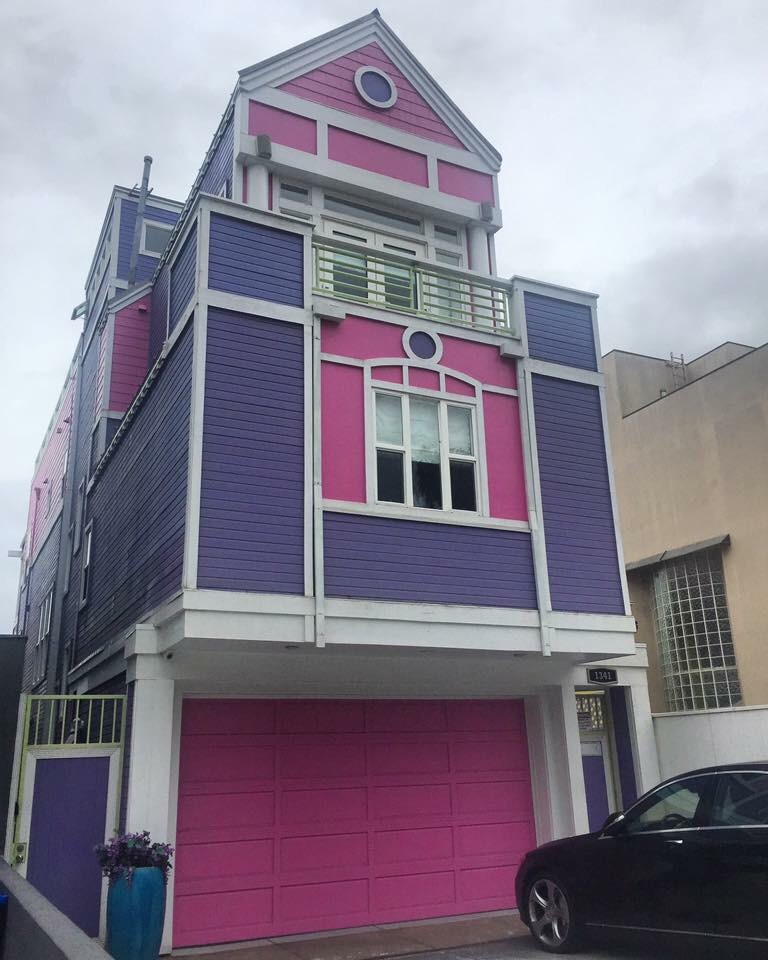 The drive southward, and ever closer to the airport, took us through iconic Santa Monica and our final L.A stop: Venice. Very different in winter to the lazy, sunny, surfer images I had seen, the quiet side streets off Abbot Kinney Blvd contained every dream bohemian house I could have imagined. We roamed the streets, waiting for our lunch reservation at an eatery I had always wanted to go to. The Butcher’s Daughter, on Abbott Kinney, is a vegetarian restaurant that serves food as beautiful as the surroundings it is in. We each had a huge mixed bowl, for him a tumeric latte and for me a cacao latte on the side. 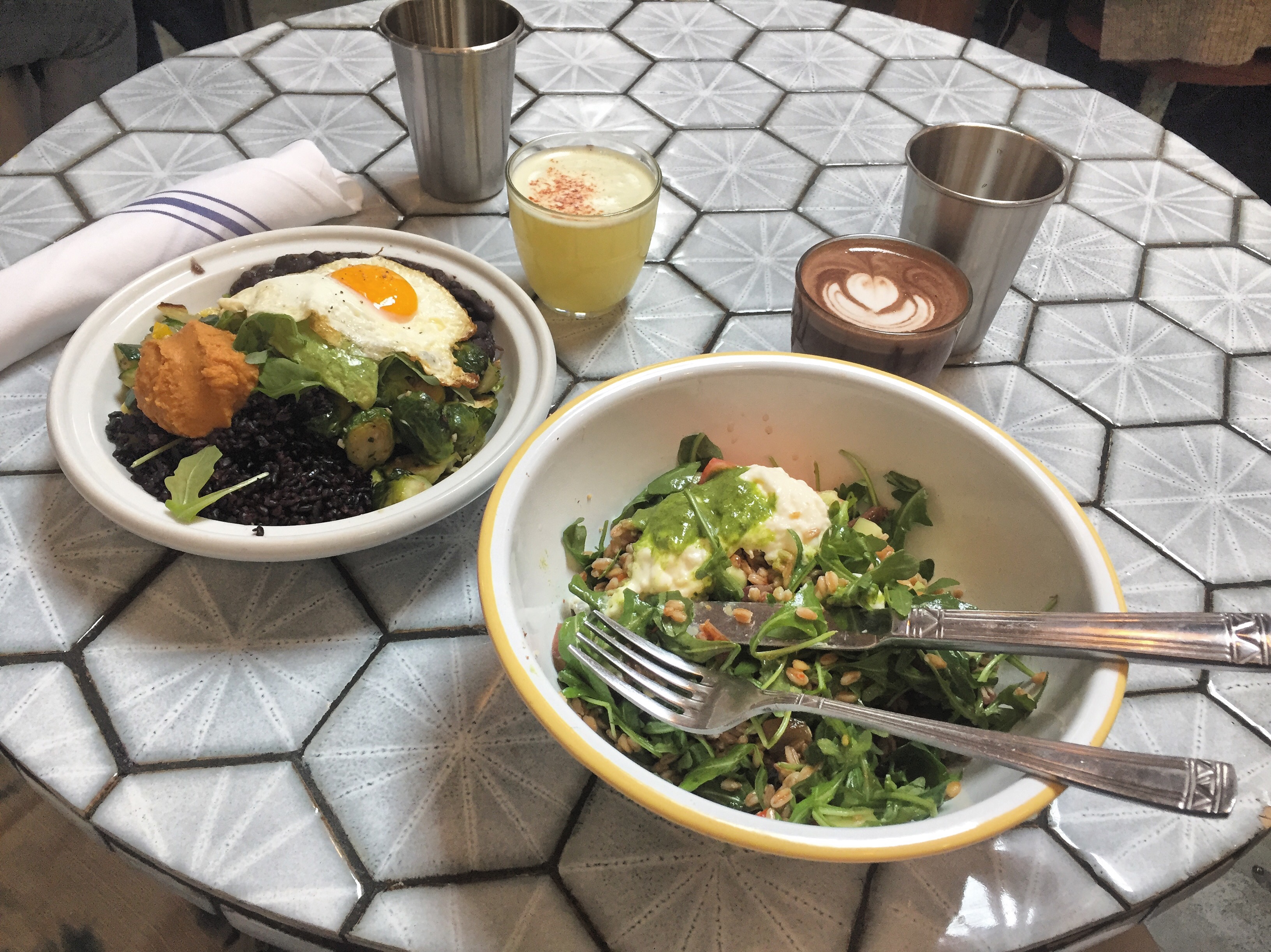 Strangely, it was here we felt the most out of place on our whole trip. Slim, highlighted blonde girls dressed similarly in expensive knitted jumpers gossiped over coffee; tall, athletic-looking guys talked about crossfit, mindfulness and yoga over their food. As beautiful as this place was, and as tasty the food, we were outsiders in our hiking boots and unbrushed hair.

In a way, it was almost a perfect end to our trip; the only way to leave a place you love is to finally look forward to going home.

I am a third culture kid | Food, travel and interesting spots | Special interest in wellness, mindfulness and wheat & dairy-free living. Most of all though, I am just trying to find where I fit in in the world. View all posts by suddenstranger