Read more about our stay in Palm Springs here.

During our stay in the desert of southern California, we spent a day further in the Mojave desert. Driving down the Twentynine Palms Highway, winding up to higher ground, the dark grey sky sat heavy on the horizon. This was the first day on the SoCal leg of out trip that it really felt like winter, it lent a different quality to the desert landscape than one normally sees in photos. This area is of interest ecologically, a place where two desert landscapes blur. It shoulders where High Mojave and the Low Colorado deserts merge. This strange feeling sits low to the earth here, the jarring and contrasting landscapes provide a true otherworldy experience. This small part of the world has inspired some of our favourite music: desert rock, Josh Homme, and U2’s eponymous album. Rancho de la Luna is one of the recording havens for many artists; John Lennon and Jim Morrison also both recorded music in this corner of wilderness.

First stop was coffee at Cafe Frontier in Yucca Valley for two flat whites and two buttery chunks of coconut-oat flapjack. Attached to the cafe was Hoof and the Horn, a store with bohemian homeware and western-inspired clothing, where we wondered around with our coffees. I bought a beautiful handwoven throw that I was willing to forgo a few clothing items in order to fit into our case. This shop seemed to embody our spiritual home, a far cry from our current past-paced city existence.

Driving off the highway up into the hills, we headed for Pioneertown. Historically created as a wild west film set, the ‘town’ still operates today with a saloon, motel and selection of small stores. Still, the heavy grey sky loomed over us, a reminder that most people were home with their families during this time of limbo between Christmas and New Year. I forgot my jacket in the car when we got out at Pioneertown, I could feel the ghostly desert cold seep into my bones and we cut our stroll short, in favour of the warmth of our car. 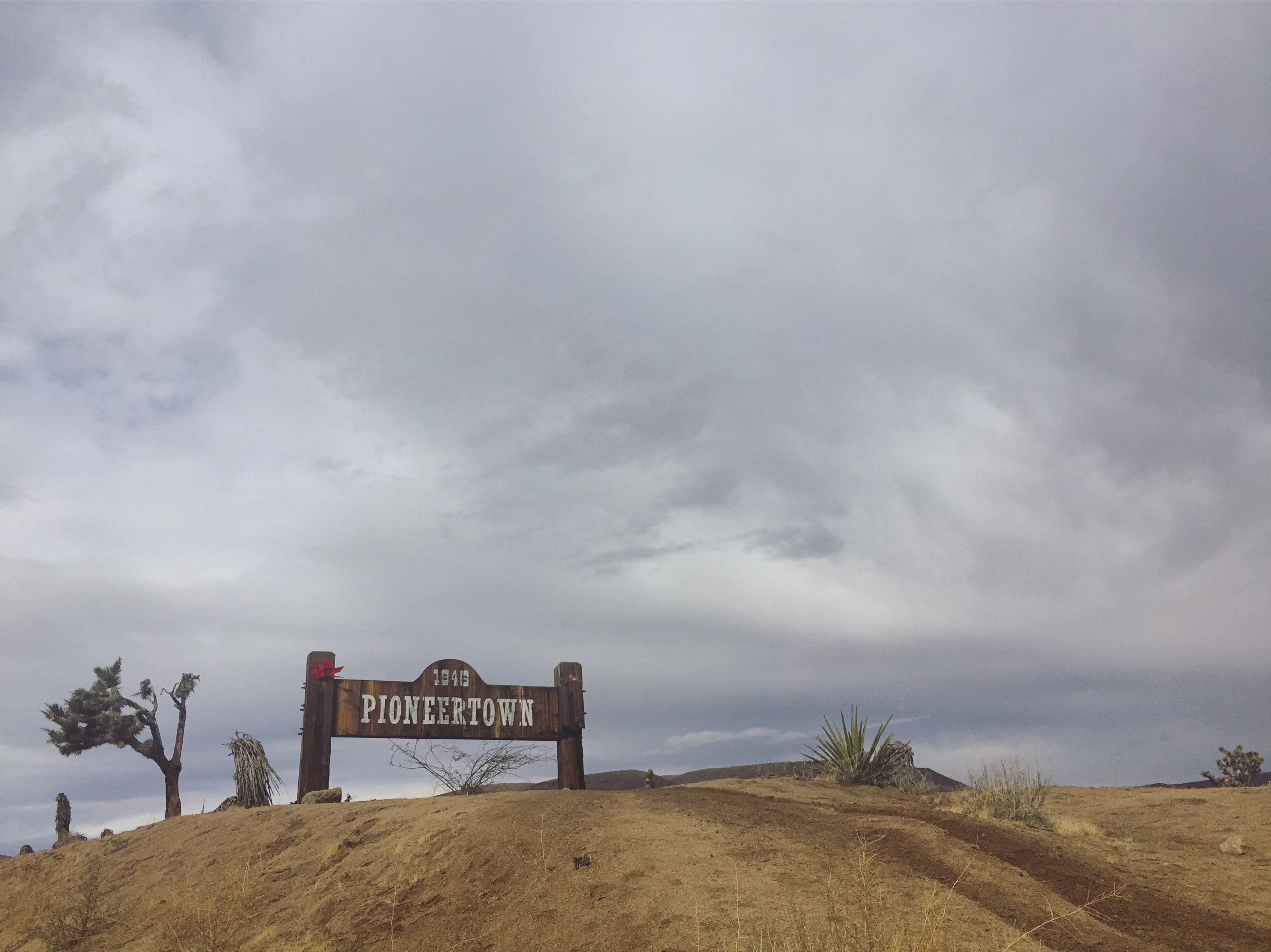 Joshua Tree National Park welcomed us, and our little jeep wound through the nearly empty roads. Getting out several times for photo stops, the silence almost became the third passenger on our drive. 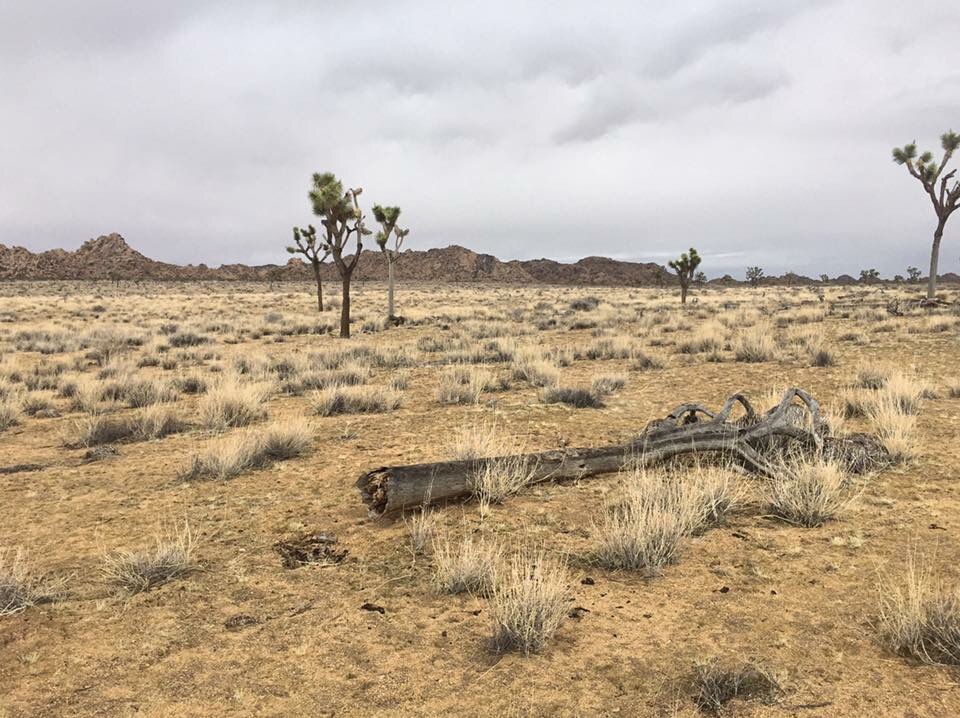 Above and below: desolation in Joshua Tree

Imagining what it would be like to visit in the height of summer, at first I felt let down that we were missing that true ‘desert’ experience due to the rain. However, we really had the place to ourselves, and barely bumped into a hiker or cyclist the whole drive through the park. This in a way was more special than seeing it properly, a desert is inhospitable and empty whether it is dry or wet.

They say that this part of the desert has a ‘two or three year rule’: that after this time the extreme conditions either spit you out or change you forever. Regardless of outcome you will never be the same after spending time in a place like this. I now often think of this in relation to living in London, of course a different experience, however such extremes to pace of life will either change you or make you leave. When I travel, I always aim to completely immerse myself into the area, and mainly visit places I could see myself living in. It’s easy to see where I fit in to a landscape, the footprints left behind, but it’s often only when one is long home that the imprint of a place recently left can be felt. Such was the mark Joshua Tree left on me.

Our way home wound past Desert Christ Park, a sculpture garden on the hills overlooking Yucca Valley. The modest park was created by Antone Martin, in the height of the late 1940s Cold War tension, and was dedicated on Easter Sunday 1951. Antone’s hope was to inspire world peace in a time of fear and war. All the statues embody this desperation and unease.

Meanwhile, for us night was fast falling, and the grey clouds were slowly turning to indigo. Being the only people moving for miles, we walked trough the white statues alone and in silence.

All above: Desert Christ Park

The view to Yucca Valley

Back at our kitcsh Palm Springs hotel, we were too tired for anything but some low-key pasta and hotel room margaritas. Early the next day, we would be leaving for L.A. Tomorrow we would leave behind this haven of bandits and dreamers, anarchists, bohemians and loners.

June brought a long-awaited trip to Ibiza for the wedding of two friends. I arrived to our house at Vadella Pueblo past midnight on my own, my own husband having arrived earlier for the stag party. The 40minute taxi ride to the little bay where we were staying for the weekend, Cala Vadella (Vadella Cove), was stressful conducted in my half-Spanish. It included many dead ends and wrong turns, literally, not linguistically, as the driver spoke to me in fast Spanish. I went to bed after checking all the closets for hidden intruders by torchlight, glad to put the journey behind me.

I woke up to the steady hum of cicadas, alone in the silence of our whitewashsd house, and able to actually see it in the light of day. I pottered around, looking through each of the rooms in turn. When I had left my hunger long enough in the empty apartment, I prepared to venture out En Español.

Walking down the quiet street towards the beach of Cala Vadella, I marvelled at the Balearic houses sitting perfectly in place under a flaring hot sun – whitewashed with cactus-lined pools. 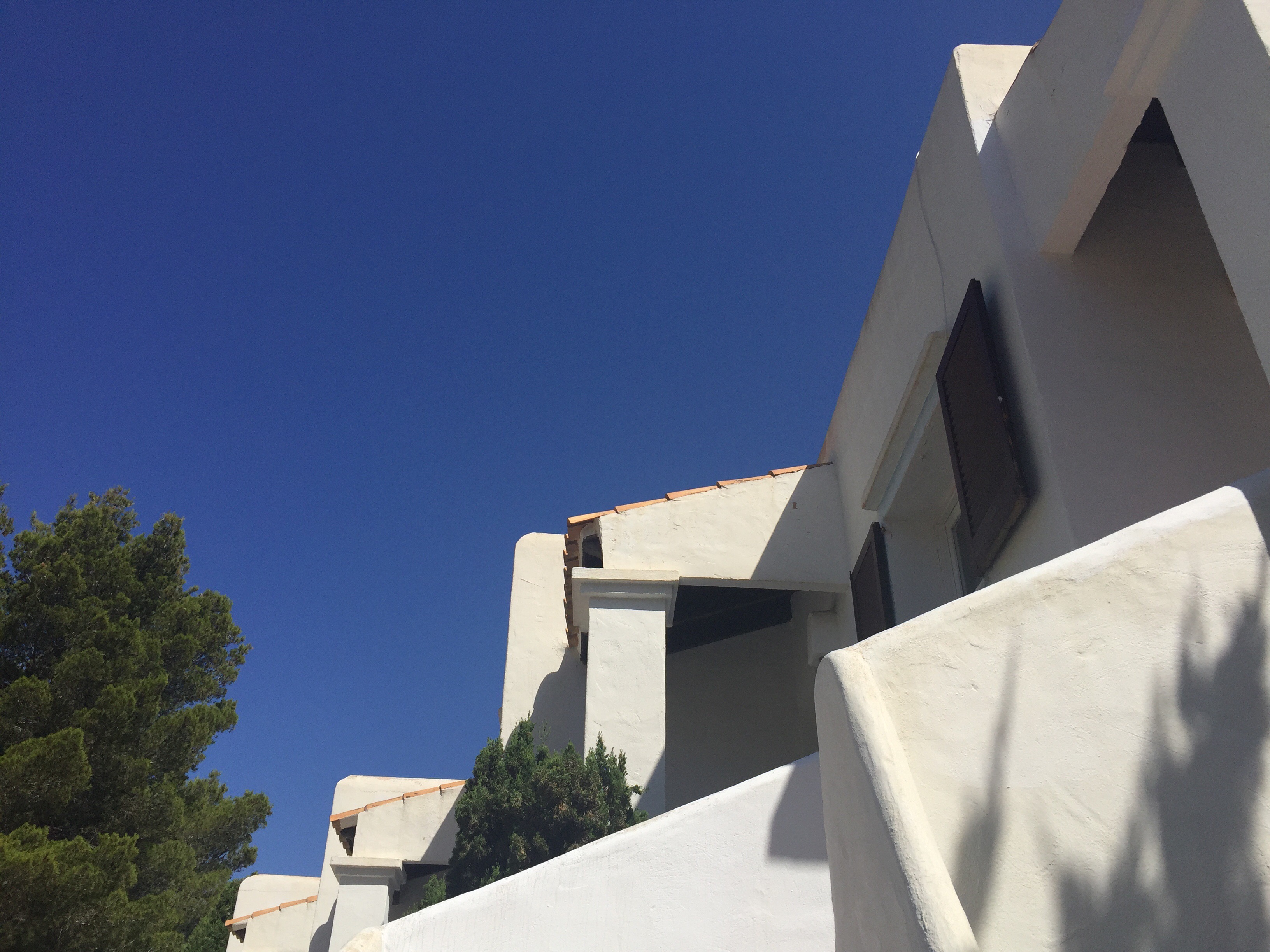 The view from our front door

The road to the bay veered sharply to the right at the edge of a cliff, then wound steeply downwards. Through a break in the trees the sapphire bay opened up dramatically in front of me, and though it may sound corny it did take my breath away.

Cala Vadella from above

My husband joined me, and we spent our first afternoon together on the sandy beach eating bocadillos de jamón at Vadella Beach Bar and drinking fabulously strong mojitos para llevar from Restaurante Cana Sofia. 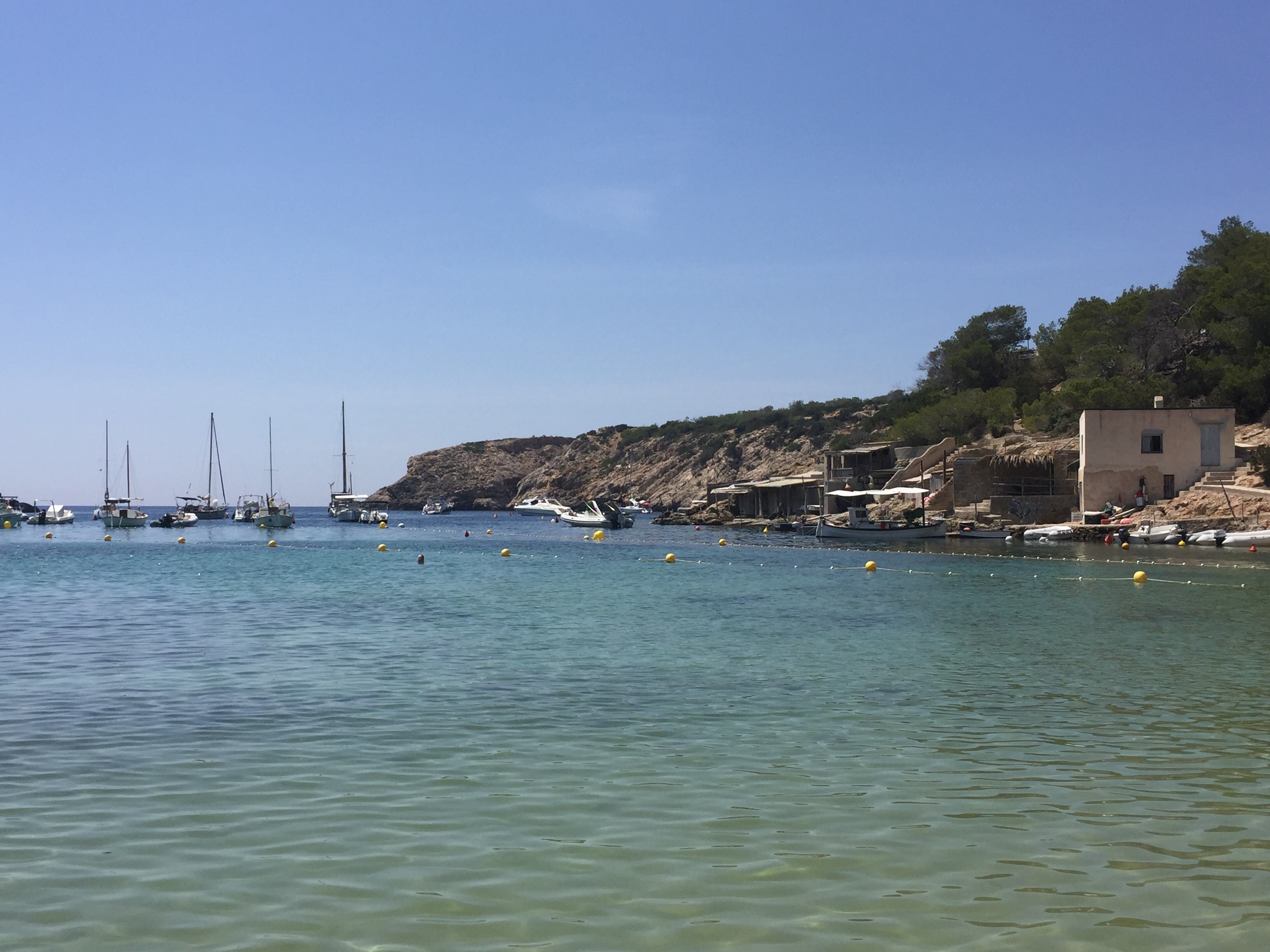 Laziness and hunger took us from our beach loungers to Cana Sofia when the sun started setting, where we had a meal of freshly prepared tapas under the vines. We sipped on ice-cold rosé wine and watched people walking the beach beside us.

We returned to our balcony to sip a €4 bottle of local cava, listening to the steady hum of crickets and cicadas and talking long into the night.

A long evening on our balcony

The heat woke me before sunrise, I returned to my spot on the balcony from the previous night, and watched the sky turn from navy, through light blue, to spectacular pink.

Timelapse of the sunrise

The second day was our wedding anniversary. To celebrate we did what we do best, headed down to the beach to do it all again. I swam through the azure water, one of my favourite things to do, and had a run-in with a rogue jellyfish producing a nasty sting. I had no idea at the time that this sting would ‘re-appear’ weeks later as the venomous stingers were still in my arm. We had a fantastic stone-baked margarita pizza from Cana Sofia (again!) which was covered in fragrant basil leaves the size of my hand.

We went home in the late afternoon to freshen up for dinner, and I was desperate to see a famous Ibizan sunset as clouds obscured the one the night before. On our walk back in to town for dinner, we stopped at the cliff, in a deserted parking lot. The sunset was better than I had hoped for, the sky seemed to be set on fire, and it gave both our faces a golden glow as we looked around. We could hear music, and walked closer to the cliff’s edge to see a huge sound system set up in a small cave below, the bass so loud I could feel it in my chest. Only two people danced around, and it felt like we had crashed a secret party.

All above: that golden glow

We concluded the night with an enormous, and first ever, paella, followed by a beer on the beach. I can still taste the flavour, it was so rich and savoury. 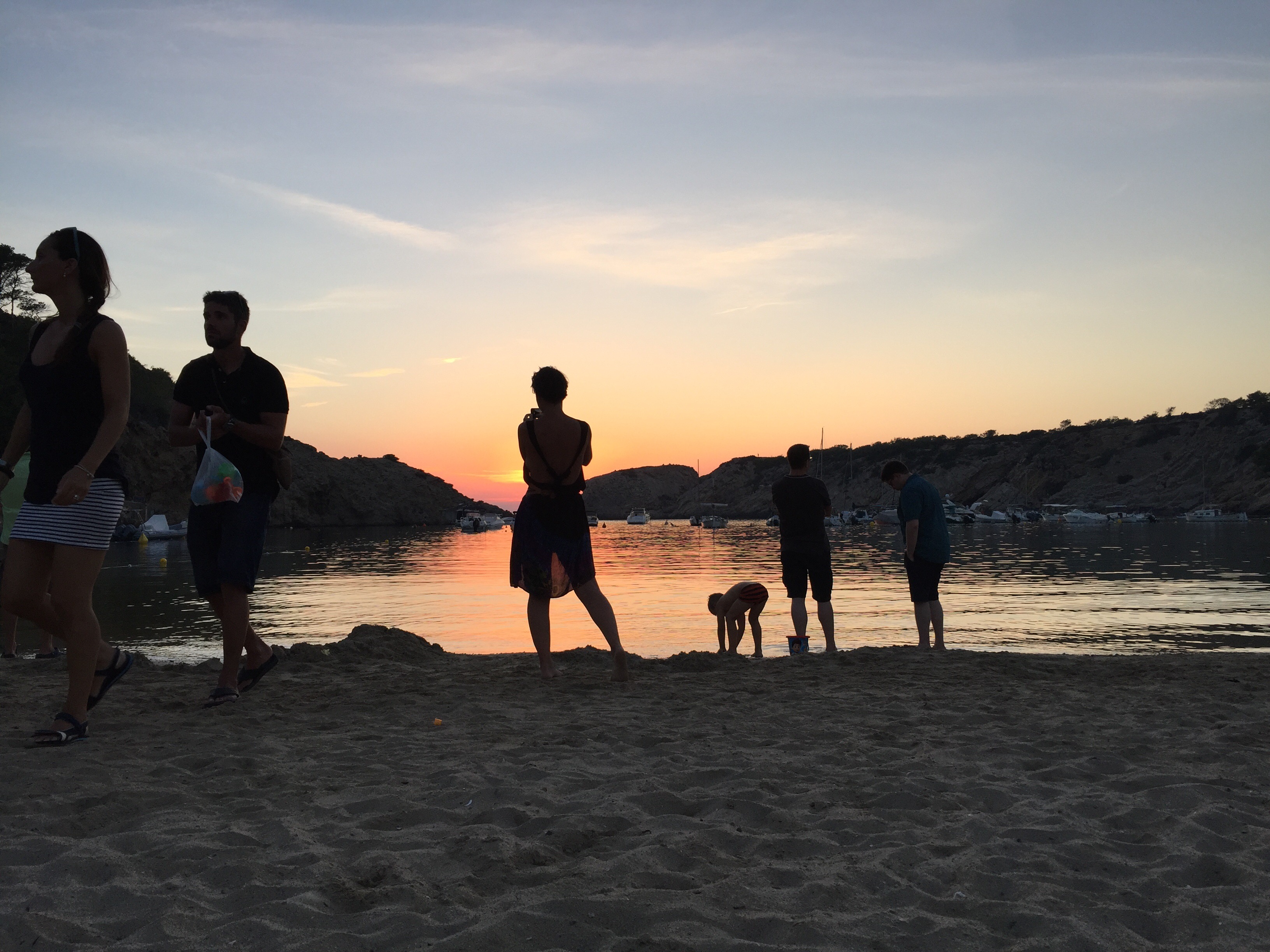 The next, and final, day was the wedding day. We struggled to a achieve any semblance of ‘pretty’ in a heavy heat, but made it to the other side of the island in time regardless. Experimental Beach was a venue within Las Salinas nature park, a UNESCO world heritage eco-system area, and a large exporter of salt. I knew we were drawing near in the taxi when we passed salt ponds and piles. We were greeted at the venue with a citrus-crisp white sangria, and we had enough time to look around before the wedding got started.

The venue before the guests arrived

After a beautiful ceremony where two friends were promised to each other for life, we ate and drank in the glare of the setting sun, and danced for hours under a navy blue sky. 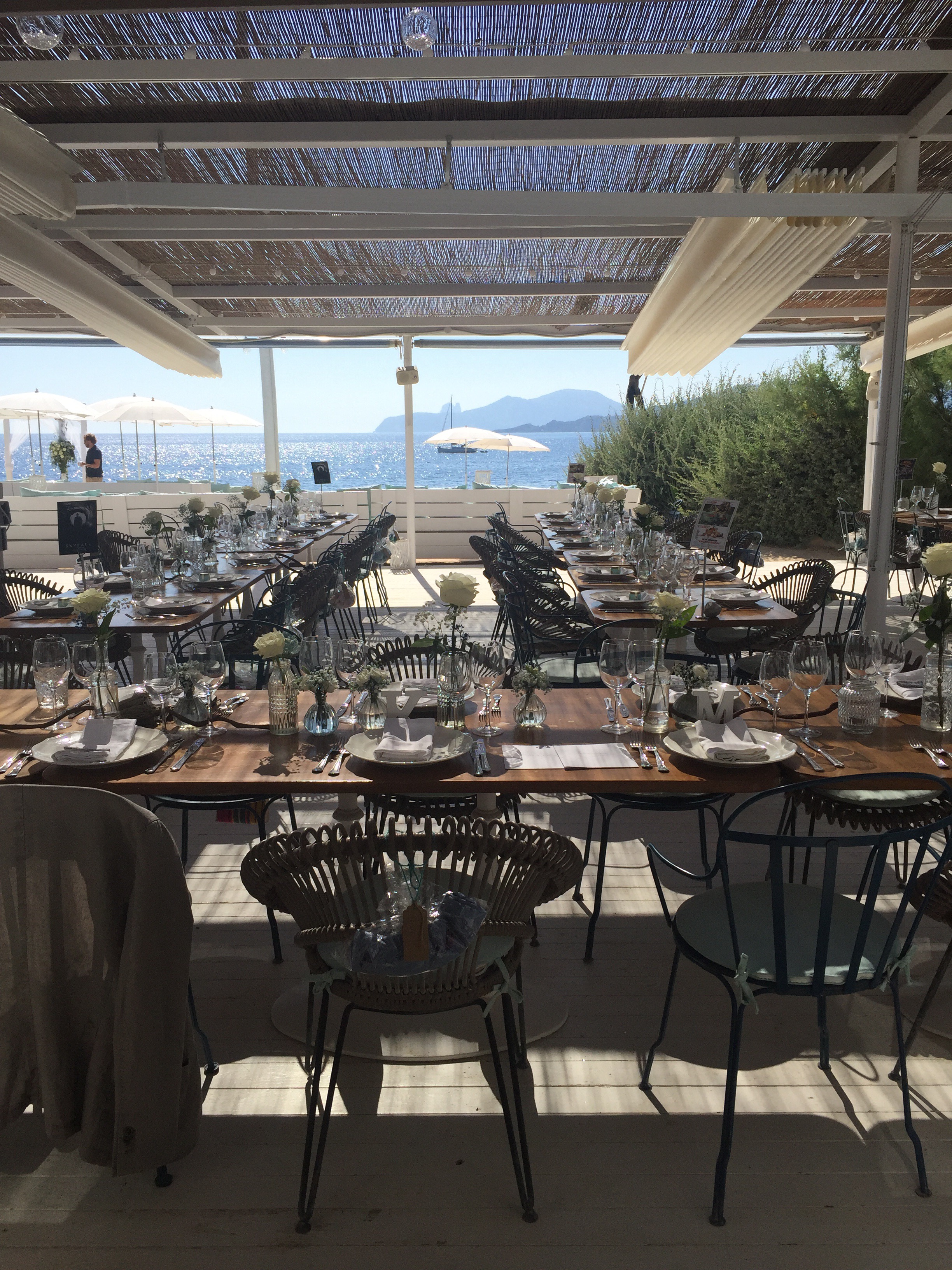 The venue from the beach

Ibiza was a surprise, it was somewhere I hadn’t really planned to go to due to its reputation for a wild party island. What I saw was completely different, our quiet bay was such a refuge from City life, the local food so spectacular. I found the locals on ‘our side’ of the island to be some of the most friendly I’d ever met. I loved the peace and being close to nature once again.